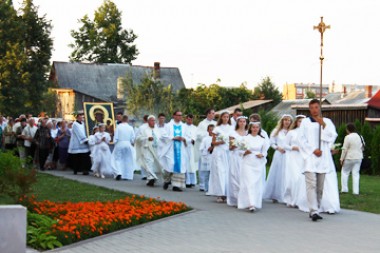 All were astonished by the huge crowds of the faithful, who for half the night were standing in a huge queue in front of Sacred Heart of Jesus Church in Daugavpils to individually pay respects to the Mother of God. In the morning, on the second day of the Latvian peregrination on July 29, the icon visited another parish in the city.

Next, the icon visited Aglona, the most important Latvian shrine, to which every year in the first half of August many pilgrims come on foot from all parts of the country. After the Rosary many of the faithful prayed before the icon with the custodian of the shrine.

Another stop was the cathedral in Rēzekne. There to honor Our Lady a rarely used, the very solemn main entrance was prepared. As Diana Stanko, coordinator of the pilgrimage to Latvia writes: „because of road construction, we could not come through the main gate, but were forced to use, the so-called black entrance. And so God has shown us once again that while we wait for Him at the ceremonial gate, He can come from any side and suddenly surprise us”. During this meeting, Anna Kancane, the 89-year-old founder of Latvian pro-life movement, turned to the Blessed Virgin with a fervent prayer for life. With great affection and with tears in her eyes she thanked God for starting the pro-life movement in Latvia and for saving many children from abortion.

After Mass in the Cathedral in Rēzekne, Our Lady visited the small town of Viļaka where the long-time mayor Sergei Maksimov is a strong supporter of life. In many towns in Latvia, stand large churches that were built during the period of independence before World War II. Now, however, few people live there and the churches are almost empty. But five priests from neighboring parishes waited here for the Mother of God and the church was filled with so many people that many could not fit in the pews and had to stand the whole time. Eighteen pilgrims walked 18 km on foot to bring the Mother of God their prayers for the protection of life. The pastor of the parish was shocked and said that since being stationed in this town, he did not remember such an influx of faithful, even on greatest holydays.

Our Lady stopped for the night in Alūksne, a town in northeastern Latvia. During the ceremony in the church, the pastor, a native Pole, Fr. Wiaczesław Bogdanow, spoke not only about the history of Czestochowa icon, but also pointed out that life without God causes enormous problems in the secular world, but by turning to God and His Mother through prayer, we can rebuild our lives. Diana Stanko, coordinator of the Latvian peregrination of Częstchowskiej icon continued: „it is a fact that the civilization of life is above all a civilization of love."