Feast of the Annunciation on March 25 falls exactly nine months before Christmas. Ecuador also celebrates the Sanctity of Life Day. This year for the March for Life Ecuadorians invited their special guest - Our Lady of Czestochowa  who just arrived in Santo Domingo de los Colorados.

Similar marches took place this year in nine dioceses of Ecuador. At Santo Domingo, it was for the first time. 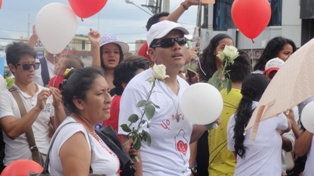 The march was to start at. 1p.m., but already since noon the participants prayed in the parish church in the very center of the city, where since yesterday evening the Icon was present. Others gathered in the square in front of the church.

They carried small, large and huge banners what ever they had. And of course the huge number of balloons: blue and white and red. It was evident that the preparation was thorough. 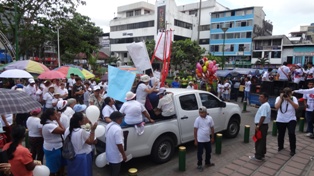 Several large cars were set up with occasional decorations, such as one of them presented a giant conceived child in the womb. A lot of young people dressed in pro-life blouses.

An open truck was turned into a moving music stage. Young people chanted rhythmic pro-life slogans. They sang, danced and above all brought in a dynamic, joyous atmosphere.

Just before the start of the March, the Icon was taken from the church. When She appeared in the door way Our Lady was greeted with applause and cheers.

Our Lady of Czestochowa in Her Mama Mobil was at the head of the march.

Before her rode a horseback escort with Divine Mercy symbols on the shabracks. The Divine Mercy Action also helped in the adaptation of the pickup truck to carry the Icon.

At the back of the escort, a truck with a music band and a young leader led the whole crowd, having a great sound system at the disposal. 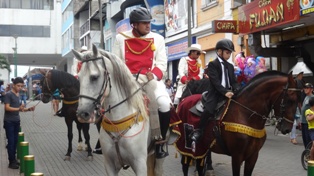 More than three thousand people took part in the march. "Viva la Vida" in all sorts of variations and rhythms were repeated continually. The organizers initiated the recitation of the Holy Rosary. They also talked a lot about the conceived child and the drama of abortion and the protection of the family.

Very touching was the moment when the 20th day after conception child's heart beat was played through the speakers. All participants in the march knelt wherever they stood, on the roadway, on the sidewalk, on the lawn ... And in the silence was filled with that heartbeat. 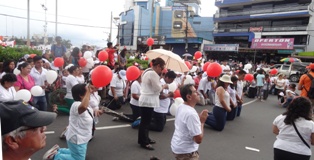 They prayed silently for life.

On the side of the street, there were plenty of people in the shops. There were multi-generation families. Most of the so-called spectators watched with great interest and approval.

The march route was quite long and ended in the beautiful, modern cathedral of Good Shepherd. The crowd filled this large church completely.

The Czestochowa Icon, brightly lit, was placed on the side of the presbytery. 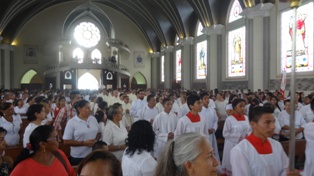 The solemn Mass was presided by the ordinary of the Diocese of Santo Domingo His Excellency Bishop Bertram Wick with 20 priests concelebrating.

At the end of the liturgy,  young choir sang the song of the  meeting of the Holy Father St.John Paul II with the Families from Rio de Janeiro. Next, the Act of Dedication of Ecuador to the Sacred Heart of Jesus' was solemnly renewed, which all the faithful recited. It must be recalled here that Ecuador was the first country dedicated to the care of the Most Sacred Heart of Jesus and Mary. 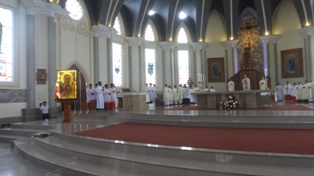 A young couple of a Venezuelan and Colombian who had many problems Gave a testimony and presented their little son. They also thanked for the help they experienced in Ecuador. In conclusion, the young mother said that you should always trust and believe God. He will help even in the most difficult situation.

Bishop Wick blessed pregnant women and with infants in their arms.

At the end, all gathered made a pledge of the spiritual adoption of the conceived child. After the Eucharist, many people took advantage of the opportunity to approach the Icon, touch Her, and have an individual prayer. 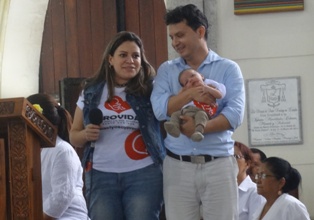 Our Lady will remain in Santo Domingo Cathedral for the Sunday next day and will then begin the pilgrimage through all the parishes of the Diocese of Santo Domingo. 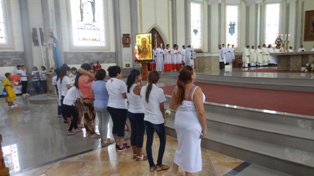 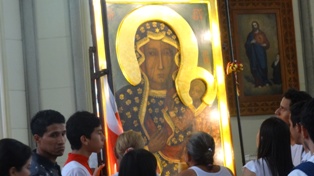