Diocesan Sanctuary of Black Madonna of Piedemonte and Sabana

The visit to Arauca had a specific purpose, to meet the bishop, Monsignor Jaime Muñoz Pedroza, and the community that is carrying out the construction of a sanctuary in honor of the Queen of Poland.

The sad face of Our Lady marked with a wound creates empathy in the inhabitants of this area, as Her face recalls the violent events that this part of the country has had to endure living the conflicts of the guerilla war. 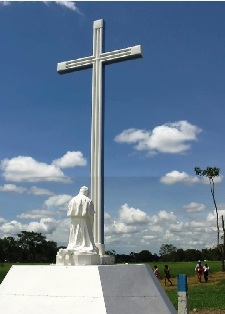 They identify themselves with this image because they carry deep wounds that leave scars, that can only be healed through Jesus Christ and his Mother.

For approximately two years there is on every first Saturdays of each month a procession to the land where the Diocesan Marian Sanctuary of the Negrita of Piedemonte and the Sabana is being built. She adopted that name to unify the two regions that in the past have been a little distant. The sanctuary is 160 kilometers to the west of the city of Arauca. This Saturday the activity summoned many people to come and is characterized by regret, confession, Eucharist and effusive greetings at the time of peace regardless of the origin of the people.

The main icon, which will be in a special place in the sanctuary, was a gift from Cardinal Stanislaw Dziwisz - Secretary of Saint John Paul II - to Monsignor Luis Augusto Castro Quiroga, former president of the Colombian Episcopal Conference, who generously offered it to the Diocese of Arauca. Monsignor Muñoz instinctively thought that an image like this, where the pain and suffering of Our Mother can clearly be seen, 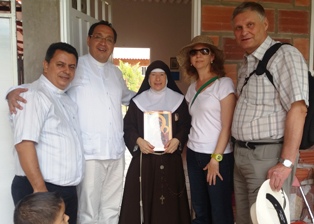 could be especially helpful for this community that has been so battered by the actions of the guerrilla.

At this moment the sanctuary already has the Community of Poor Clares (the Order of Saint Clare) since May 27, 2015. With their sacrifices and prayers, the sisters are helping to propagate this important initiative and reconciliation. At the beginning they had financial aid from the diocese, but nowadays they are self-financing by developing handicrafts and hosts that are distributed in almost all the nearby parishes. Just for these days two more sisters came to the convent, totaling six. 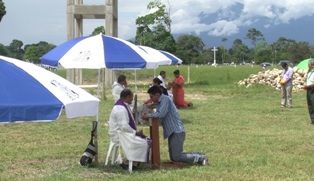 Saturday, September 2 was something special. The feast of Our Lady of Czestochowa was celebrated. First, the rosary was recited in procession from the entrance where a large cross is already placed with Pope John Paul II on his knees, then Bishop Jaime Muñoz Pedroza celebrated the Holy Eucharist and finally blessed the third bell of the bell tower. The two previous bells were placed in honor of the Blessed Virgin Mary, but this one is named after Servant of God Bishop Jesus Emilio Jaramillo Monsalve, who was abducted, tortured and murdered by an ELN commando, on October 2, 1989, and who will be beatif by Pope Francis during his visit to Colombia now days. 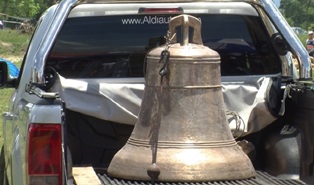