From the 2nd to the 7th of September, Our Lady of Czestochowa was present at St. Jacinto Parish in San Jacinto at the Bua. San Jacinto del Bua is a rural parish in the province of Santo Domingo de los Tsachilas, located in the northwestern center of Ecuador, 40 minutes from the city of Santo Domingo. It is 284 meters above sea level and has a population of approximately 11.000.

For five consecutive days, the parishioners, together with the parish priest, Father Romel Freire, prayed the Rosary of the Dawn at 5:00 am. 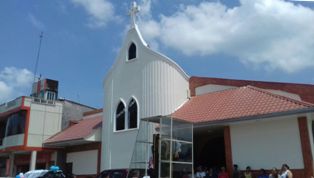 The weather is providential, it is not a rainy season and they could go out to the main streets carrying the Icon with them in a procession. Also, every night, at 7:30 p.m., the Holy Eucharist was celebrated.

During those days a family catechesis with the parents and children was organized, on the value and dignity of human life. Father Romel passed some videos about the icon pilgrimage in other countries so the parishioners could see how the Icon was receive in other cultures, and thus reaffirm faith in God and veneration of Mary. Some of the movements that helped during these days were John XXIII, Little Brothers of Mary and Family Pastoral.

On Sunday night they did a serenade to the Virgin, as they have some parish choirs that wanted to entertain the Mother of Our Savior. All the people traditionally  received a prayer card with the icon on one side and the prayer of St. John Paul II from his encyclical Evangelium Vitae on the other.

For the parish priest, Fr. Romel Freire, this was an unexpected visit, since they were not prepared to receive the Pilgrim Icon. 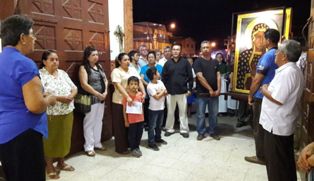 He was informed with little time in advance. However, he said that it was a pleasant experience and that despite not having enough time to organize everything, they were able to give all to the Mother of God. "I had more parishioners than in previous days, because everyone wanted to meet Her. As people are very curious, and the Icon is large and illuminated, people were surprised to see this Holy Image and came to see it. I do not know where they all came from!”, he commented with a smile.