Our Lady creates an opportunity

Father Hector Godoy is a committed shepherd of the Santo Domingo diocese. He is in charge of two parishes that are in the peripheries of the diocese: the parish of Jesus de Gran Poder (Jesus of Great Power) and the Parish of Our Lady of the Angels.

From the 19th to the 25th of September, the Icon of the Czestochowa Virgin visited the area of ​​San Vicente del Nila (which belongs to the first mentioned parish)

where there is a large chapel that accommodates this quite large community. 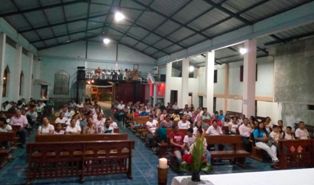 The parishioners received the Icon with much veneration and Fr. Jorge Bárcenas, vicar of the parish, was in charge of the liturgical celebrations.

From September 25 to 27, the Icon was transferred with an escort to the Parish of Jesus de Gran Poder to the town of Luz de America, located on the 23 kilometer of the Santo Domingo - Quevedo road.

The escort departed from Nila with many people who wanted to accompany the Virgin to her new destination. There were about five cars, two truckloads of people and numerous motorcycles, all behind the Mama-mobile. Among them small children. They left at 7:00 p.m., passing through different villages, and in each village they blow the horns of all the cars and made great noise to announce the passage of the Czestochowa Icon. It was one big party! Everyone went out to the streets to see what s going on. From Nila to Luz de America it took them about an hour, traveling about 10 kilometers on a paved road, but then another 10 kilometers in an unpaved road, so that people behind were in a great cloud of dust. But that did not matter as long as they were following Her.

The mass began late, at 9:30 pm, celebrated by Father Leon Juchniewicz, who is the custodian of the Icon in Ecuador. During the three days that the Mother of God was here, the holy rosary was recited and there were nocturnal vigils until the 11:00 pm in the company of the parochial groups, mainly thanks to the people from the Legion of Maria movement. Many people approached the Icon to ask Our Lady for Her intercession.

From September 27 to 29 Our Mother came to the Parish of Our Lady of the Angels in Puerto Limón. Here She was greeted joyfully by the missionaries of the Schoenstatt movement. Fr. Hector Godoy celebrated the Holy Mass. The moments of veneration extended until late at night, intertwined with the prayer of the holy rosary. 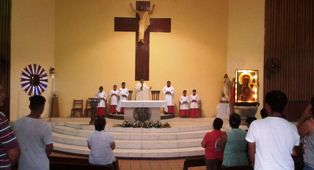 "As a priest I did know the Icon, mainly because in our diocese we have some Polish missionary priests. But we have learned more from Her because of this crusade for life She is making across all continents. This visit was very beneficial, since we need to redouble our prayers especially now when some people are trying to implement a law on gender ideology. That's why this visit was like a thumbs-up, since we must invoke our Mother to take care of all her children”, said father Godoy.