The Pilgrim Icon ends Her visit in Panama

The Pilgrim Icon of the Virgin of Czestochowa ended Her visit in the Panamanian isthmus. She spent almost 10 months touring Panama City, Chitre and Colon. Angel and Carmen de Ruiz - a couple who belong to the Trinitarian Spirituality of the Children of the Mother of God were the custodians of the Icon.

The Trinitarian Spirituality of the Children of the Mother of God has its roots in Colombia 35 years ago and is present in Panama for 18 years now.  Archbishop Jose Domingo Ulloa of Panama, appointed Angel the custodian of the Icon as being the president of the Marian Apostolate of the Archdiocese of Panama.

Angel tells us about the visits of the Mother of God:

“The first place the Our Lady visited in her Icon of the Virgin of Czestochowa is FETV Channel, where we had the opportunity to interview Fr. Leon Juchniewicz, a Polish missionary, who brought the Icon from Ecuador. From there She went to the Nuestra Señora del Carmen Church in Via España. That symbolically  marked the tour in Panama, because the Virgin begins Her visit in a Carmelite church, where the priests received Her with such love, and ends the visit at the Carmelite Sisters' House in Colon. I remember there were other options, but Maria specifically wanted to go to that one.

The Virgin then visited the Diocese of Chitre, during the Pre World Youth Day, because young Polish people came to this diocese. In Chitre She was a week in the Cathedral of Saint John The Baptist. Also visit the parish of Saint Michael Archangel and Our Lady of the Rosary, and also the chapel of the Augustinian Sisters.

After that the Icon returned to Panama City to the sector called Condado del Rey, to the Church of Our Lady of Hope, already at the time of World Youth Day. Then She went to Albrook to St. John Paul II Chapel, where She is with the relics of the Holy Father. Here She was received by the Apostolate of Jesus and Mary, who were fascinated with the visit.

For just one day She visited the St. Luke Parish in the Costa del Este sector where a large group of Polish pilgrims received the catechesis part of the WYD program. Something beautiful was the presentation of a typical dance group that delighted the audience.

After World Youth Day, the Icon visits the parish of St. John The Apostle in Brisas del Golf, and then went to the sector of December 24 to the parish of the Blessed Sacrament; She then arrived to the Church of Carmen in Juan Diaz, with Fr. Domingo Escobar, where Family Day was celebrated. It was March 25, and a Day of Prayer for Life had been scheduled, where for a week families prayed the rosary in the company of the Icon.

Later She went to the Purity of Mary Catholic School, to the chapel of Jesus The Teacher, a chapel that was designed by Jesuit priest Marko Ivan Rupnik, famous for making mosaics in different churches around the world. Students constantly visited the chapel where the Icon was located to learn more about the meaning and Her visit in Panama.

From the school the Icon went in procession with a Marian Group to the Villa Lucre Chapel belonging to the community of the sisters of the school.

After that, She went to the Church of St. Joseph in the Casco Viejo, for a Cenacle with the Flame of Love Group, they had prepared the Hymn of the Virgin of Czestochowa, the same that is sung in the Sanctuary in Poland.

The most special visit was undoubtedly to the St. John Paul II Center, a project initiated by Archbishop Jose Domingo Ulloa, where all the indigent and people with drug addiction problems can be accommodated. It is a home with open doors, where needy people come for breakfast, to bathe ... and the Virgin arrived there to visit them! That was very nice because it showed that overflowing love of the Virgin for the most needy in Panama. The Icon arrives on Thursday for a Holy Hour, and sanctifying everyone and everything that was in that place.

After that, we traveled to Colon to the Home of the Barefoot Carmelite Sisters, in Valle de la Media Luna, and remains there from the Holy Week for up to three months. The nuns were delighted with this visit and we almost had to beg them to return the Icon.

We can say that the Icon spiritually touched the two oceans again, since She was in Panama on the Pacific side and in Colon, on the Atlantic side. 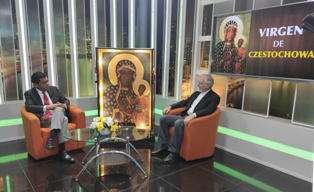 Again Our Lady moved to the Chapel of FETV Cannel and on August 8 She moved to the Church of Saint Anthony of Padua, in the Miraflores sector, for the farewell mass celebrated by Archbishop José Domingo Ulloa Mendieta, O.S.A. that coincided with the mass of the entire clergy of the archdiocese who were gathered at a retreat. Than returning to the FETV chapel for a final interview with Fr. Leon Juchniewicz, who came to take Her back to Ecuador.

Together with my wife we ​ experienced this whole process in a lot of prayer, so that the Virgin could put in our hearts where she wanted to go. So She moved where she wanted!”