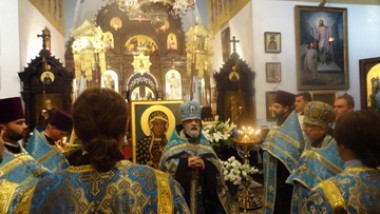 On Saturday, August 18th, in the afternoon, Our Lady of Czestochowa had arrived at the Orthodox parish of St. John Klimak in the Warsaw district called "Wola."  There, She was being awaited by the pastor of the parish, Mitrate Nicholas Lenczewski, assisted by several priests, deacons and numerous faithful.  Many Catholics also joined them.

After the Icon had been brought into the church and placed on a pedestal surrounded by flowers, the pastor of the local Roman-Catholic parish of St. Lawrence greeted the faithful gathered.  Next, the pastor of the parish, Father (Mitrate) Nicholas Lenczewski addressed all:

"That we may be one!  These words are in the depths of the soul of every Christian, regardless whether it is a Christian from the West or from the East.  The late Holy Father, John Paul II, our fellow countryman, spoke wonderful words:  these are two lungs – the left and the right – that is unity.

Yesterday, at the Royal Castle in Warsaw, in the heart of our country, a mutual agreement was signed between the East and the West, between the Roman-Catholic and the Orthodox Church.  This agreement means that every Orthodox sees his brother in the Roman-Catholic Church, and every Catholic sees his brother in the Orthodox Church.  We all understand that it cannot be accomplished overnight. (...)  We live together in one homeland, hence this Act, signed yesterday at the historic bulkheads of Warsa and Sawa is so important.  (...)  And today, our Warsaw parish of St. John Klimak has received a great gift, the Icon of Our Lady of Czestochowa.  Everyone standing here has two mothers in their life: the mother who gave him life and the Mother of God, who is always with us.  Please see how beautiful She is.  She will remain with us until tomorrow.  We pray to the same God and to the same Mother of God."

The Orthodox Parish of St. John Klimak (Climacus) in Wola (a district of Warsaw) experienced dramatic moments after the collapse of the Warsaw Uprising.  Thousands of people died brutally murdered in this district.  Most homes had been burned down.  All of the priests as well as the residents of the parish house died.  The choir members, the neighbors, the children from the parish orphanage and their teachers – they had all been killed.   While outside of the city of Warsaw at the time, the only one who survived was Father Nicholas Lenczewski with his four-year old son, who now is the pastor of the church, which was rebuilt after the war.

Below is a quote concerning the protection of life and Christian values from the signed agreement about the reconciliation of the two Churches, signed on August 17, 2012 in the Royal Castle in Warsaw by the Patriarch Cyril and Archbishop J. Michalik:

(...) "In the name of the future of our nations we are in favor of respecting and defending the life of every human being from conception to natural death. We believe that a grave sin against life and the disgrace of modern civilization is not only terrorism and armed conflicts, but also abortion and euthanasia.  The family, as a permanent union of man and woman, provides the firm foundation of every society.  As an institution established by God (cf. Gen 1:28; 2,23-24), the family must be respected and defended.  It is the cradle of life, a healthy educational environment, a guarantor of social stability and a sign of hope for the society. It is in the family where man matures to become responsible for himself, for others and for the society in which he lives. With sincere concern, hope, and love we look at the young people whom we want to protect against the loss of moral values, and educate in the spirit of the Gospel "(...)