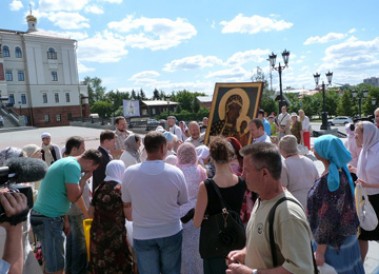 "Pro-life van" - a car which is traveling with the icon of Our Lady of Czestochowa, in the evening of June 25 arrived to Yekaterinburg in the Ural mountains. On her way from Vladivostok by Ussuryjsk Country and Siberia she covered already about 7.5 thousand. km. Thus, the Asian part of Russian pilgrimage "From Ocean To Ocean" has taken place. Arrived safely and on time, but three times it was necessary to repair the car after flying over extra holes on the road.

In Yekaterinburg the Czestochowa icon was hosted by the Orthodox Church together with the Russian pro-life movement. They prepared there a truly royal and impressive welcome. First, at the border of the city a group of cars with banners and flags waited for the "pro-life van" carrying the icon. Together they reached the center, where the priests in solemn procession through the streets of the city carried the icon to the main and very well known, great church of "The Blood".

The full name of this church is "Church of the Blood, dedicated to All Saints' shining in the Russian Land." (perhaps a better translation would be “Russian soil”) This is one of the most important Orthodox church in Russia. A symbol of martyrdom for the faith during the persecution by atheistic communists after the October Revolution. And we must remember that in the twentieth century, Russia experienced a horrific and widespread persecution of the Church and believers. Most of the bishops and priests were murdered, the church was close to a total extinction. The victims of communist atheism program are millions of people. Orthodox church of the "In the Blood" is very symbolic, because it is built on the ruins of the house of Ipatjev where in the basement in 1917 on the orders of Lenin Tsar Nicholas II and his entire family: a wife, four daughters and a small, sick son Aleksij were brutally murdered. Then also killed all the servants, so that there would not be witnesses to this atrocity. The walls of the basement of the house long bore the stains of blood.

Later the building housed a museum of atheism and archives of the Communist Party, whose members were proud to have a photo with the bullet-riddled and blood stained walls as a background. The house was demolished in 1977 to prevent people from praying in this place. Orthodox church of the "In the Blood" was dedicated in 2003. This is a place to which many now go as a pilgrimage. It is a place of state visits and distinguished guests. People here are praying with the intercession of the holy martyrs of the revolution for the rebirth of faith in Russia. This place also has great significance for the pro-life and family movements in Russia. Pilgrimage "From Ocean To Ocean" fits perfectly in that tradition.

For Our Lady of Czestochowa as a Queen a special throne in the center of the Church was prepared. The celebration was long and very solemn. At the end the priests held the icon, and young and old faithful approached, kissed her and walked humbly crouched under the icon, which there is an old practice of worship. The ceremony was attended by a large crowd of people. It was a really significant event.