Meeting in Mexico of the Organizing Committee of the Peregrination

From the 5th to 7th November 2015 the Organizing Committee of the Peregrination held its meeting in the capital of Mexico. It was attended by the representatives of Mexico and Colombia, as well as Marcela and Peter Dobes, and international coordinators Ewa and Lech Kowalewski from Europe.

The meeting started with the Holy Mass in the presence of the Czestochowa Icon at the Guadalupe Shrine. Dr Monique Risso, a doctor from Gibraltar was also present.

After the Holy Mass the Act of Entrustment of the Protection of the Civilisation of Life and Life to the Mother of God was said in Spanish. Next the congregation went to the building of a former primary school in the premises of the shrine, where the remaining part of the meeting took place. 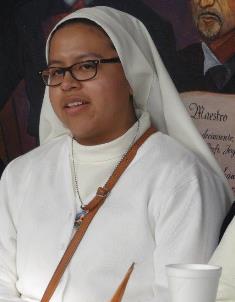 The presence of sisters of the Immaculate Conception of Our Lady from Tenango with two priests: Polish Pallotines, Fr. Bartłomiej Pałys SAC and Fr. Kazimierz Czulak SAC made the participants remember the meeting with Our Lady  of Czestochowa in Tenango. It turned out that one of the candidates had received the convent name Jolanta of Our Lady of Czestochowa after the visit. Ewa Kowalewska used the opportunity and presented the sister with a small icon brought from Polish Czestochowa. The sister was very happy.

After the members had introduced themselves and their work, they went to a hall where they could see a film about the peregrination from Czestochowa, Russia and Eastern Europe, which was made for them in Spanish version. They liked it very much.

The meeting was chaired by Beatriz Gonzales, who is the main organizer of the peregrination in Mexico together with her husband Joseph. She asked for some testimonies about  the experience of traveling with Our Lady. They talked about their experience  and their families. There was a testimony of a person who believes that a miracle saved her life, when a street light post, hit by a lorry, was falling onto a group praying in front of an abortion clinic and onto the Icon. 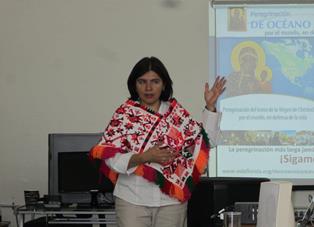 At the last moment, almost one meter from the Icon it seemed to have been pushed away from an invisible wall and fell doing no harm to anybody. Fr. Czulak stressed an amazing situation. In North America and Europe Our Lady of Guadalupe is venerated as the protector of life. And in Mexican parishes it is the Czestochowa Icon, peregrinating from ocean to ocean, that is seen as a symbol of the defense of life.

The meeting was continued on Saturday evening. A lecture on the Czestochowa Icon and the aims and experiences during the historic pilgrimage was delivered by Lech Kowalewski in English,

and interpreted into Spanish. They also watched films from the further legs of the peregrination till late at night. First it was meant to be only a report from Poland but many people wanted to see more. Beatriz read the Spanish translation which was ready but there had been too little time to put it on the film. We can say the film had a second inauguration in Mexico. The meeting was also attended by the pastor of the parish of St John Paul II and St Thomas More, Fr. Luis A. Monroy López, who is the custodian of the Icon in Mexico.

In the following days there were intensive talks on the further plan of the peregrination. It was decided that the Icon would stay in Mexico till the end of April and after the Feast of the Divine Mercy She will go to the Yucatan Peninsula with the intention to take a ferry to Cuba. We kindly ask everybody to pray for that.