The Parish of St. John Paul II has been the headquarters of the Czestochowa Icon in Mexico.

The pilgrimage of Our Lady of Czestochowa  across Mexico has lasted almost a year now. During this time the Icon visited many places and churches which are very important for the Mexican people. However Our Lady  of Czestochowa has always been coming back to Her headquarters which is the church of St. John Paul II and St Thomas More.

It is located in the 1st deanery of the 4th vicariate of the archdiocese of the city of Mexico. We must realize that this is the biggest diocese in the world and it has been divided into vicariates, which are managed by auxiliary bishops (vicars) of this huge diocese. Thanks to this original arrangement the Church in the capital has maintained its single entity and that has had an enormous significance in the contact with the authorities which are often not very friendly to the Catholics. The central location of the Parish as well as its new patron-saint, Pope John Paul II, makes it convenient for the coordination of the pilgrimage “From Ocean to Ocean” in Mexico.

As early as the first meeting of the National Organizing Committee this particular church was unanimously chosen as the base for the pilgrimage. In Mexico the Czestochowa Icon has been known as “Mom of St John Paul II”. He told them that about himself during the first visit to Mexico in 1979 (before his visit to his homeland Poland). It was therefore obvious that the Parish of  the name of the Saint Pope would look after “His Mom”.

The pastor of the parish is father Luis A. Monroy López, a young, energetic priest, who is willing to invite priests from Poland and feels close to Our Lady of Czestochowa. For the time of the visit in Mexico it is him who has been made the custodian of the Icon, which regularly returns to the parish and is often warmly welcomed.

The International Coalition „From Ocean to Ocean” representatives who had come to the secondo meeting of the Mexico Organizing Committee, Ewa and Lech Kowalewski from Poland and Marcela and Peter Dobeš from Slovakia, attended the Holy Mass in the parish of St John Paul II and St Thomas More. The Mass was celebrated by Fr. Luis. The Church is modern and spacious. The interior decoration is elegant and full of simplicity. To the left of the presbytery there are big images of both patron saints of the parish.

After the Eucharist Ewa and Lech talked to Fr. Luis at the vicarage. They invited him to see the new film in Spanish on the first leg of the peregrination. Ewa mentioned that Fr. Peter West, the coordinator and custodian of the Icon in the USA, had said at the end of his long journey with Mary, that he was led to the priesthood through dedication to Jesus Christ by the hands of Mary according to St Louis Maria Grignion de Montfort. Fr. Luis smiled and said that his story had been similar. 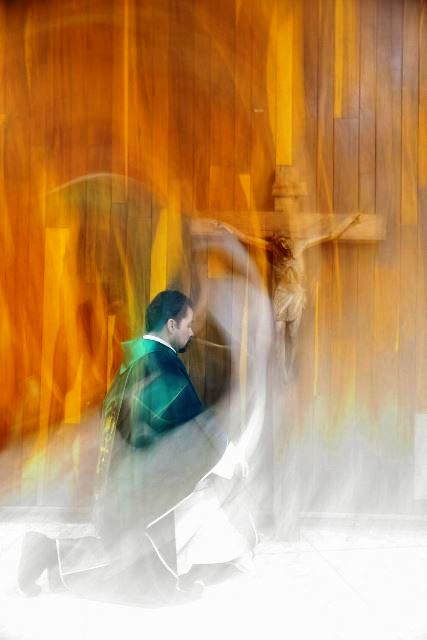 There was a photo  on the table. It was strange. It looked like a colorful impressionist painting – Fr. Luis in green chasuble and colorful stains in the background. He explained that during the Czestochowa Icon visit, during the Eucharist, a photo camera had fallen to the floor. It was a traditional one, with a film to be developed. The owner wanted to save the precious photos and had it developed. The strange photo was taken “on its own”, exactly when the camera was falling to the floor. When you examine it carefully you can see a outline of Our Lady of Czestochowa and Her embracing hand. Just look at it closely.