During the ceremony of Divine Mercy Sunday, 3 April 2016 in Tenango del Aire, which is just 30 km from the capital the Mexico City the Czestochowa Icon was hosted once more. The local parish of St. John the Baptist where three Pallottines fathers from Poland work is led by Fr. Bartholomew Pałys SAC

who is also the custodian of the Shrine of the Divine Mercy, which is located at the parish belonging to the Diocese of Valle de Chalco.

The Sanctuary of Divine Mercy in Tenango was founded 18 years ago. It is in union with the Polish Pallottine center in Czestochowa, in the so-called. Valley of Divine Mercy, built on the western slope of the Jasna Gora. These centers also connects the same for the two sanctuaries a great statue of Christ the Merciful, which was made in Mexico in two copies. The Tenango Church and Convent has been renovated, because the buildings are from the sixteenth century. This church was built on the initiative of Juan de Zumárraga, the first Archbishop of Mexico, who witnessed the apparition of Our Lady of Guadalupe. Above the church dominates a huge mountain of one of the largest volcanoes in Mexico Popocatépetl (El Popo), which is active from time to time. Tenango is in the second danger zone approx. 30 km from the crater. El Popo, one of the Mexican volcanoes marked on the robe of Our Lady of Guadalupe. 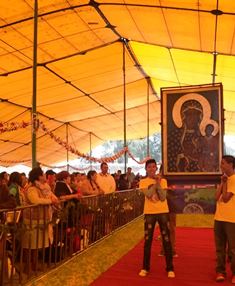 The local inhabitants love this sanctuary and come in large numbers. On Divine Mercy Sunday always a great crowd of people come here, also the Indian population still speaking the Nahuatl language. This year more than 15 thousand people come from all over the area and together bivouac, take part in meditation of the Bible, pray, they go to confession, and of course, happily participate in the solemn Mass. As every year, the fathers set up for them a big tent for almost 10 thousand people which protects from the sun during the ceremony.

Our Lady of Czestochowa in Her  Icon came to Tenango for the second time. Last year She was also here on Divine Mercy Sunday. Through Mexico the Icon constantly travels in the company of the image of Christ of Divine Mercy. A visit to Tenango is the culmination of the pilgrimage through Mexico.

Pontifical Solemn Mass began at 12:00 noon celebrated by Víctor René Rodríguez Gómez Ordinary Bishop of Valle de Chalco Diocese. During the ceremony standing before the traveling through the world Icon of Czestochowa with great gravity and authority announced the Universal Declaration on Protection of the Civilization of Life. 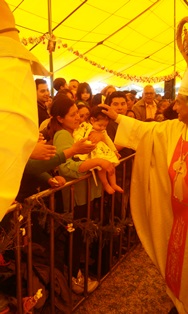 The initiative to announce the declaration came from the Mexican coordinator of the "From Ocean to Ocean" peregrination of Out Lady in Her Czestochowa Icon through the world in defense of life. It combines the message of the Virgin of Guadalupe and Out Lady of Czestochowa which flows now from Mexico. After the Mass. Family of José and Beatrice with their children as the coordinators of the pilgrimage approached the participants of the ceremony explaining the genesis of the universal call to protect the civilization of life, so needed by the whole modern world and which flows from their land from Mexico, so sensitive to the call of the Mother of God. It was also an opportunity to summarize the pilgrimage "From Ocean to Ocean" in Mexico. Unfortunately, the pro-life situation in Mexico is currently very tense. The left-wing government prepared an amendment to the law introducing the legalization of abortion to all regions in the event of violence. After the visit of Pope Francis, who very powerfully supported the defense of unborn life, they arrested a well-known pro-life leader Jorge Serrano. This is to intimidate all who engage in the defense of life.

After the performance of "Villa de las Ninas" dance group with regional Mexican dances and testimonies of lay missionaries during The Hours of Mercy, a solemn procession passed through the city with the statue of Christ the Merciful and the spiritual presence of Our Lady of Czestochowa.

On Saturday in Poland before the miraculous image of Our Lady of Czestochowa at Jasna Gora on the day of the National Pilgrimage of Defenders of Life during Holy Rosary the Declaration of Mexico has also been presented, combining the message of Our Lady coming from both Mexico and Poland.