In the heart of the Kashubian region - Kościerzyna greets Our Lady

In the heart of the Kashubian region - Kościerzyna greets Our Lady 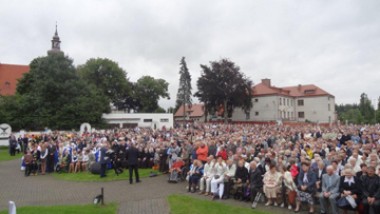 Everyone was waiting for the Blessed Mother at the Shrine of Our Lady of Sorrows, where a beautiful and very old statue of the Pieta adorns the church.  The peregrinating Icon arrived here to greet the Kashubians.

The procession looked impressive: the children and the young people in beautiful Kashubian costumes, an impressive number of altar servers, a choir, a brass band, a folk band, flags and banners.  And great crowds of people, not only from Koscierzyna, but also from many distant places.  The members of the parishes closer to Koscierzyna came on foot, the ones from more distant parishes delegated group on bikes or arrived with cars.

At the entrance to the shrine, were already waiting for Our Lady the Primate Emeritus, Archbishop Henryk Muszynski and Bishop Wieslaw Smigiel, the administrator of the Diocese of Pelplin, in the company of several priests.  The custodian of both shrines of Koscierzyna, and a great organizer, Father Marian Szczypinski, welcomed the Archbishop with great enthusiasm.  On the side, Father Irenaeus Smagliński was giving an interview to the diocesan "Radio Voice," live.  Unfortunately, a drenching rain fell, even though no one had placed such order.  The crowd became a swarm of colorful umbrellas.

The Czestochowa Icon in the Life Mobile pulled up to the sound of car horns.  After greeting Our Lady, the procession started heading for the Shrine of Our Lady, Queen of the Families.  The Icon was placed at the altar, on a high, beautifully hand-carved wooden pedestal.  The preparatory prayer began; it was led by the young people.  The Act of Entrustment was renewed, led by a married couple.
With the start of the Mass, the rain had stopped!

Ks. Archbishop Muszynski, among other things, said, "The Peregrination of the Icon of Czestochowa 'From Ocean to Ocean' in Defense of Life is the work of God Himself.  Keeping in mind the purpose of ​​the peregrination of the Icon of Jasna Gora, Czestochowa, which was originally initiated by the Servant of God, Stefan Wyszynski, the Primate of the Millennium, we have to admit that the present pilgrimage of Our Lady is unprecedented, to the extent which has not yet taken place.  This pilgrimage is the answer to man's mortal threat globally.  We are witnessing a great injustice in the world, as many people die, because others have forgotten their duty of protecting life, especially that of those who are defenseless."

The ceremony was also attended by the representatives of the city authorities of Kościerzyna.

During the Mass, the choir of St. Cecilia sang, and the band and the brass orchestra performed.  Yet, the most beautiful was the powerful singing of the well-known hymns in praise of the Blessed Virgin Mary, performed by the vast crowds gathered at this festive and beautiful celebration.