A breeze of fresh air and hope in Edinburgh

A breeze of fresh air and hope in Edinburgh 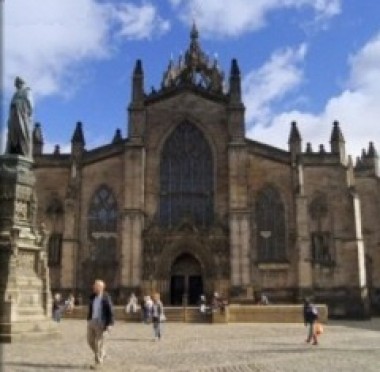 On arrival at the Metropolitan Cathedral of Our Lady of the Assumption in Edinburgh at 5.00pm on Monday 12th November, the Icon of the Black Madonna was welcomed and blessed by the Mgr. Michael Regan Cathedral administrator and priests representing the Polish and Scottish communities in Edinburgh. The large crowd gathering there to welcome Our Lady steadily growing in numbers as the time for mass approached were led in prayer and in particular in the Rosary of the Unborn a special rosary given by Our Lady for these times to combat the sin of abortion.

Bishop Stephen Robson, was the principal celebrant of the Holy Mass that was attended by a congregation that filled the Cathedral. In his homily Bishop Robson focused on the slaughter of two world wars commemorated in the recent Remembrance Sunday services and compared it with the slaughter of millions of babies by abortion which we are not remembering. He mentioned the recent international conference on abortion held in Edinburgh saying that it was a disgrace to the capital and to Scotland.

All parish groups in the Cathedral made a contribution to the visit of the Icon. The Polish/Scottish pro -life group led a Rosary with meditations based on Humanae Vitae and other documents of the Papal Magisterium on life and the family. Private veneration of the icon and prayers and hymns and Taizé chants of devotion organized by the Divine Mercy Group and songs of praise and prayer from a girls group in the Cathedral made up the program that lasted until 11.00pm. The Blessed Sacrament was exposed throughout, underlining the Unity of the two hearts of Jesus and Mary in this pilgrimage, and the proceedings ended with benediction. There was in fact Exposition of the Blessed Sacrament during 80 per cent of the time of visit of the Black Madonna to the Cathedral on Monday and Tuesday, the motif being that all prayer is being directed to Jesus through Mary and through her intercession. All prayers were bilingual in Polish and English and a particularly poignant moment occurred when a representative of the Polish Scout Movement “battled” his way all the way from London on a particularly difficult train journey to be with us and to stand at attention in uniform at the side of the Icon during the Jasna Góra Appeal.

The following day the program included prayer and rosary led by the Legion of Mary, and by the pro life group, and Holy Mass was offered up for the intentions of the pilgrimage on two occasions. The act of entrustment to The Virgin Mary was made after every mass celebrated during the two day stay of the Icon. Of particular significance was the participation of Father Rafael a Greek Orthodox priest who led the congregation in the Jesus prayer offered in an additional seven languages for the cause of Christian unity.

“Lord Jesus Christ, Son  of God have mercy on me a sinner.” Prayed in Greek was repeated in English Gallic, French, Spanish, German, Italian and Polish followed by a period of silent prayer. Father Rafael concluded the prayers with an “orthodox” blessing of the congregation.

Father Jeremy Milne’s beautiful sermon was centred upon the necessity of perseverance in prayer to Our Lady for the Civilisation of Love. In his homily he reminded us how the trust that Mary showed through her fiat, led to the Incarnation of Jesus and ultimately to our salvation. She is the Mother of Trust and Prayer leading us to be a people of trust and prayer.  The concluding ceremony presided over by Fr Jeremy, Fr Tadeusz Puton from Poland and a priest representing the Ukrainian community in Edinburgh, followed benediction and the Icon of Our Blessed Lady of  Częstochowa was accompanied onto the next leg of her journey to the sounds of Czarna Madonna and Salve Regina.

Just as the Icon had arrive, so she departed in the safe hands of the Knights of St, Columba who coordinated her transport throughout the pilgrimage on British soil.

Dr.Stefan Boron who coordinated the visit of the Black Madonna to Edinburgh made the following points. 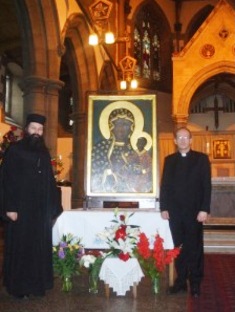 “The Pilgrimage of the Black Madonna has brought us a breath of fresh air and hope. Quite simply Our Lady is mobilising an army against the Culture of Death. From Ocean to Ocean has brought the pro-life agenda to the fore and given it the impetus that only heaven can give. Her coordination of the whole event was evident throughout. Filling in all the gaps that I had overlooked.”

Another interesting point is that the presence of the Greek Orthodox priest looks like being the first step to the unity that Jesus longs for. The Orthodox community in the city has a special veneration for St Andrew who is their patron, and whose relics lie in St Mary’s cathedral. Perhaps we could follow this meeting with times of prayer where we could gather together in front of the shrine of St Andrew to offer up prayers for unity together? This is a little like the story that Dr Tom Ward heard about the Romanian Orthodox during the visit of the Icon to Birmingham Cathedral. It appears that for five years that the Romanians had been praying for an occasion to meet with the Russian Orthodox. Our Lady of Czestochowa brought them together at St. Chad’s Cathedral Birmingham.