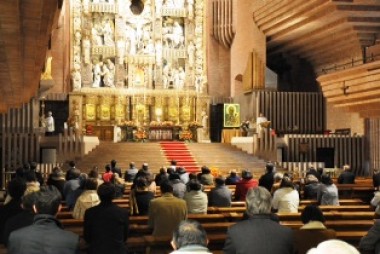 On the feast of Epiphany Our Lady in Her Częstochowa Icon arrived in the famous Marian shrine of Torreciudad in Aragon, the region of Ribagorza, near the town of Barbastro. It is situated at a particularly picturesque place – on a mountain near the Cinca river, close to the man-made reservoir of El Grado at the foot of the Pirenees.

Torreciudad is now one of the most known and most visited Marian shrines. Its story goes back to the 11th century but it thrived thanks to St Josemaria Escriva de Balaguer, the founder of Opus Dei. When he was two years old he was brought to Torreciudad by his parents to pray for saving him from a fatal disease. He was miraculously cured. The present monumental shrine had been coming into being on the initiative of the founder of Opus Dei (Josemaria Escriva) since the 60s and was consecrated only in 1975. 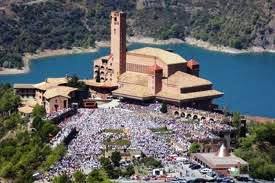 Nowadays Torreciudad is visited by big numbers of pilgrims amazed at the special, full of contemplative atmosphere of the shrine. Pilgrimages of Poles living and working in neighboring cities come here too. Our Lady of Torreciudad is venerated here. It is a Romanesque statue showing The Sorrowful Mother of God with black face, known also as the Black Madonna. The shrine is under the care of personal prelature of Opus Dei, which runs the formation center in Torreciudad.

The Czestochowa Icon was carried in a solemn procession from the square in the center of the shrine of Torreciudad to the church and put at the marble monumental main altar. It attended all the four feast Holy Masses. Many people came to the shrine. During the homily the priests presented the aims and successes of the peregrination of the Czestochowa Icon “From Ocean to Ocean” across the world in defense of life.

The most important celebrations were held in the afternoon after 5 PM: the exposition of the Most Blessed Sacrament, reflections and the Holy Rosary in defense of life and family presided over by Father Rector and the Custodian of the Shrine. The main Holy Eucharist was celebrated by a priest from Poland, Fr. Wiesław Dziadosz, who spoke in his sermon about the Marian tradition in Poland in the context of the cult of the Częstochowa Icon. At the end they recited the prayer of blessed John Paul II from his encyclical Evangelium vitae. They quoted the words of the Holy Father who reminded us that nowadays a great prayer for life all over the world is urgently needed.

On the next day at 9 AM the pro lifers took the Icon to the next place on the route of the pilgrimage – Tamarite de Litera.