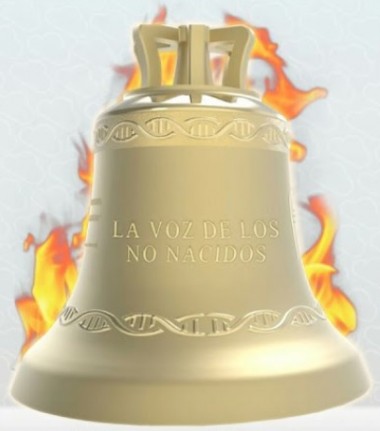 Thanks to the initiative of the Polish foundation from Podkarpacie, Życiu Tak! (Yes! for Life) over a year ago, on August 26, 2020, in the Bell founder factory of Jan Felczyński in Przemyśl, the first bronze bell, the Voice of the Unborn, was cast. Then it was taken to Rome and on September 23, last year, consecrated by Pope Francis in St. Peter in the Vatican. Since then, the bell has been visiting various parishes and participating in the Marches for Life in Poland, arousing people's consciences and enormous interest.

The great success of this idea aroused the interest of the defenders of life from Ecuador and Ukraine, who asked for similar bells to be made for them. The request was accepted and the designs of the next bells were adapted to the country of destination. Similarly to the Polish bell, there is an ornament in the shape of a DNA chain, which symbolizes the genetic code of parents - a woman and a man, mother and father of a new life, and an ultrasound image of the conceived child. However, the inscriptions were in Spanish for Ecuador and in Ukrainian for Ukraine.

The celebration of the birth of new twin bells took place in the Bell founder factory of Jan Felczyński in Przemyśl, which had been operating since 1808. It was started by the word of Bishop. Giovanni Battista Piccioli, of Italian descent, now Auxiliary Bishop of the Archdiocese of Guayaquil, diocese which is to receive one of the bells.

Bishop Piccoli expressed his admiration for the excellent initiative to create the bells of the Voices of the Unborn. He emphasized that the strike of a bell has enormous strength, which is very much needed by the defenders of life. He thanked on behalf of Guayaquil and is eagerly awaiting the arrival of the bell that is born today.

Next, MP Geraldine Weber Soreno spoke, pointing out that a battle for life is currently underway in Ecuador, as due to external pressure in the parliament, work on a law was started to legalize abortion in the event of conception as a result of rape. She emphasized that abortion is illegal in Ecuador, and now she and her friends are fighting to protect women from another trauma and to punish the perpetrator, not the victim. She also pointed out that October 8 is of great importance for her country, because in 1873 President Gabriel Garcia Moreno, as the first in the world, signed the act of consecrating Ecuador to the Sacred Heart of Jesus. The fact that the Voice of the Unborn Bell is cast exactly 148 years later is of great importance.

The ceremony was also attended by Mrs. Estela Zea de Furlato, who was the first to ask the Życiu Tak Foundation for a bell for the Archdiocese of Guayaquil and the Church throughout Ecuador. She also organized a fundraiser among more wealthy friends so that they could participate in the cost of making the bell. Mrs. Estela Zea is a very active pro-life, she also cares for the dignified burial of abortion victims.

During the casting of bells, the prayer was recited by Fr. Grzegorz Draus from Ukraine in Polish and Ukrainian, and Fr. Leon in Spanish.

Here is the text of this prayer:

Father of life! we thank you for the gift of every life, for creating the whole world. You knew us before You formed us in the mother's womb. Make us protectors of each and every one of our brothers. Let everything that lives praise You! O Lord, you know and perceive everything! Help us defend life. Amen.

Waldemar Olszewski, head of the existing for 213 years Jan Felczyński's Bell founder factory, explained in detail the complicated process of casting bells. The procedure of making the casts was launched and the information was quickly passed that the twin bells had already been born, which they welcomed with great joy.

Thanks were given by the initiator of the idea of casting bells, the vice-president of the Życiu Tak foundation, Bogdan Romaniuk, and the vice-marshal of the Podkarpackie Voivodeship, Piotr Pilch. Lech Kowalewski, the coordinator of the From Ocean to Ocean peregrination, also spoke. He emphasized that like the heart of a bell and its mighty sound, the beating heart of a conceived child is a sign of life.

In conclusion, Bp. Piccioli from Guayaquil blessed all participants and those on site and those who were able to participate thanks to the YouTube live stream.

The Holy Father has already confirmed his willingness to consecrate new bells, which is to take place on October 27. The organizers therefore invited everyone to Rome for the rest of the ceremony.