Kaišiadorys desires to be the City of the Culture of Life

Kaišiadorys desires to be the City of the Culture of Life 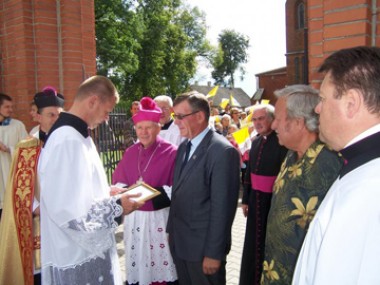 In the morning of August 9th, the Icon of Czestochowa, accompanied by many vehicles, arrived from Kaunas to Kaišiadorys.  At the edge of the town, many people awaited the holy Icon in their cars marked with flags and pro-life banners.  The motorcade passed through the city center, escorted by the police.  Our Lady entered the cathedral square accompanied by the ringing of the church bells.

Vast numbers of local residents of various age groups awaited Her, holding their flags and forming a hedge on both sides of the entrance to the cathedral.

At the entrance door of the cathedral, the mayor of the city, R. Umilevičius, together with the vice mayor, R. Kubiakas and the MP (Member of the Parliament) representing the region, B. Bradauskas, greeted Our Blessed Mother cordially.  The highlight of the day took place when Monsignor V. Grigaravičius handed the Mayor a written petition to make Kaišiadorys a City of the Culture of Life and Love, which will protect human life from conception to natural death.  Bishop Emeritus J. Matulaitis, the diocesan vicar general, and the rector of the cathedral, Father A. Jurevicius, both carried the Icon together into the cathedral, where numerous celebrations followed, during which the "Act of Entrustment of the Protection of the Culture of Life and Love to the Mother of God" was made.

At 14:30 (2:30 p.m.) local time, the Icon of Czestochowa departed in the direction of Vilnius, accompanied by the ringing of the cathedral bells.  She stopped at three medical centers along the way in the region of the Diocese of Kaišiadorys.  The meeting of Our Lady with the medical personnel was the fulfillment of the last big wish of the recently deceased, long time director of the Family Center in Kaišiadorys who was a staunch promoter of culture of life.  The first stop was the Family Medical Center.  The entire personnel, together with their director, dr. A. Baltakis, came to pray before the Icon.  Professor Birute Obelenie, a member of the International Peregrination Committee, addressed the doctors with a heartfelt appeal to fully observe their Hippocratic Oath.  Monsignor R. Jurkevičius renewed the Act of Entrustment aloud.  Dr. A. Baltakis expressed his satisfaction at the fact that the medical center run by him will have the opportunity to become the place for saving the lives of unborn babies.

The medical personnel of the Health Center for Women was also invited to the meeting with Our Blessed Mother.  All the doctors and nurses received the appeal asking them to respect all human life from the moment of conception.  The meeting that followed with Our Lady took place in front of the local public hospital in Kaišiadorys.  Despite a torrential rain that came down, the doctors and other hospital personnel patiently awaited the arrival of the Icon.  At the moment when Our Blessed Mother had arrived, the rain had stopped just as suddenly, and the sun immersed from behind the clouds.  Professor B. Obeleniene conveyed the appeal to the hospital personnel, asking them to also join in protecting the culture of life at Kaišiadorys.