Icon of Jasna Gora in Belarus

Icon of Jasna Gora in Belarus 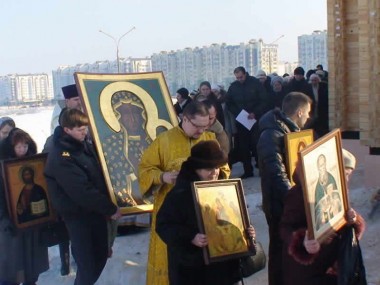 In her peregrination in the defense of life, the Czestochowa icon came to Minsk in Belarus.
Currently she is in the Orthodox Church of St. Nicholas of Japan.

Why was this parish was granted the privilege of hosting the Mother of God in the peregrination icon? Her pastor, Father Paul Serdiuk, is very involved in the defense of life. He is a member of the International Committee of Czestochowa Icon pilgrimage "from ocean to ocean."

After it was blessed and applied to the original icon, the copy intended for the pilgrimage has been entrusted to him.  He carried her across the border and at the recommendation of the committee, placed it in the church. It is in this Orthodox parish where Father Paul and his wife have run for many years a crisis pregnancy and family center "Matula", which provides psychological and material support for women with problems during pregnancy. He also helps infertile couples and gives support for families in conflict situations. He actively prevents the killing of unborn children in the Belarusian land. In the future it is planned, to build a church and Family Center complex and shelter for single mothers. This is especially needed in the new district of Minsk, which is called Stone Hill, inhabited by thousands of families, including many children. Many of them need material, therapeutic and spiritual assistance. In early February, a symposium was held there for the pro-life leaders who, together with lecturers prayed before peregrinating the icon of Czestochowa through the world. February 16 marked the 100th anniversary celebration of the death of the patron saint of the parish, a missionary of Japan, St. Nicholas of Japan (Kasatkin). The Orthodox saint is considered the patron saint of missionaries and educators, catechists, religious educational and artistic institutions, and even martial arts.

During the ceremony, people brought the Icon of Our Lady out into the street in a procession. The Orthodox emphasize that the uniqueness of Czestochowa Icon is that it is both venerated in the Orthodox world, as well as Catholic. It is the Queen of Poland and is known throughout the world. The Orthodox Church names her "invincible victory". A hymn is sung the "Victory Queen". With here cult in the East is linked the hope of a return of faith in the country.

Stay of Our Lady in the icon of Czestochowa in Minsk is only a stop on the way to the East. Probably in late May, she will visit Moscow, where she will be visiting churches, transported in a way of a rally in defense of life. It is a modern form of pro-life demonstration. A column of dozens of cars with flags and banners in defense of life traverses the main streets of the city. In late June she will move farther east, to Vladivostok, where a pro-life symposium is planned. Then she will visit more cities in Siberia. We are just waiting for the snow to melt there and the dirt roads to dry, since earlier than that, it would be impossible to pass through the wilderness.