Icon of Czestochowa in the Orthodox Cathedral in Bialystok

Icon of Czestochowa in the Orthodox Cathedral in Bialystok 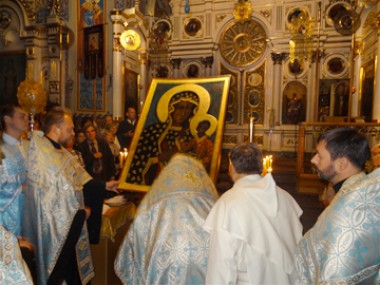 In the evening, on August 12th, the Icon of Czestochowa was carried in a procession through the main streets of the city from the Catholic cathedral to the Orthodox Cathedral of St. Nicholas, the Miracle Worker.  The Icon was welcomed in front of the cathedral by His Eminence, Archbishop Jakub, the ordinary of the Bialystok-Gdansk Diocese, who, assisted by priests and deacons, received the Icon from the hands of the Catholic priests.  They entered the cathedral all together.  The Icon was placed on a podium.

First, the Catholic priests kissed and venerated the Icon, leaving the Orthodox church after an exchange of greetings and goodbyes.

Several thousand of the faithful arrived to meet Mary in the Icon and many had waited long through the night for the opportunity to enter the cathedral and touch their foreheads to the Icon.  The Orthodox choir sang a hymn in honor of Our Lady of Czestochowa, entitled "Undefeated Victory," as well as the Akathist, the oldest hymn of the Church praising the Blessed Virgin Mary.

Early morning, on August 13th, the Divine Liturgy was celebrated and there was time for individual prayer of the faithful, allowing them to kiss and venerate the Icon.  The church was constantly filled with the praying faithful, who with tears in their eyes bid the Icon farewell later that afternoon, as "She" was being taken out of the Orthodox cathedral, to continue on Her journey across the world in defense of life.